The story of our family-owned company started in the 1980s when our parents, Martti and Anja Lehtonen, decided to fulfil their dreams and founded their own furniture workshop. Skilled artisans, they had toyed with the idea for years, while enhancing their experience in the furniture industry. It was their desire to do things differently that eventually prompted them to take the plunge.

In 1985 they left their day jobs and founded the Matri furniture workshop near the Finnish town of Salo. They started to produce furniture according to their personal values, professionally and without compromising the environment. Their idealism was an ideal foundation for Matri, which quickly expanded from a workshop into a small furniture factory.

Martti and Anja’s children grew in tandem with the company. They played amongst foam rolls and piles of fabric and made their pocket money by helping their parents at the workshop. 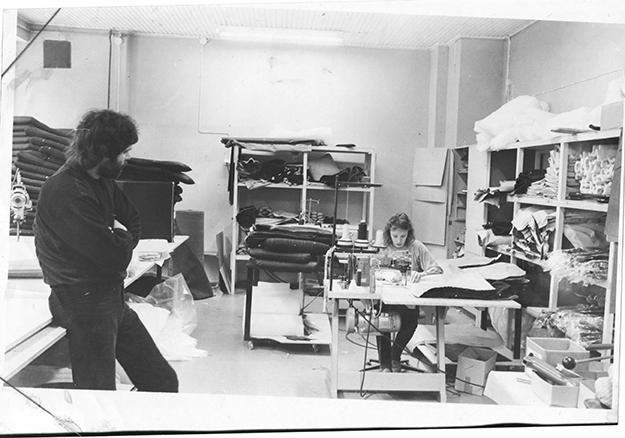 Elli followed the path set by her parents and embarked on furniture design studies. During her time as an exchange student in Germany, she met Andreas Lehnhoff, an industrial designer whose style has been heavily influenced by the Bauhaus movement and its focus on functionality.

Around the same time, Anja and Martti were spending time in Spain. They noticed that the local beds left much to be desired. For one, they were far too short for taller people. After several nights of bad sleep, they made it their mission to create the perfect bed. As they now had two young designers in the family, they asked Elli and Andreas to design an environmentally sound, affordable bed that would be both beautiful and beneficial to health.

Elli and Andreas took up the challenge. Their aim was to design a bed that would fulfil the needs of as many people as possible, with as long a lifespan as possible. This became the concept behind Matri’s white beds and customisable bed accessories.

While Elli and Andreas were working on the design of the first ever Matri bed, Elli’s brother set up the Matri factory in Estonia. Having a factory of our own enables us to guarantee that every one of our beds is produced by skilled artisans from high-quality, certified materials, and with a minimal environmental footprint – reflecting Matri’s original philosophy. The next generation now continues the story of Matri. In that story, the heart of the home is no longer the sofa, but a Matri bed.